The story behind the pixelart studio 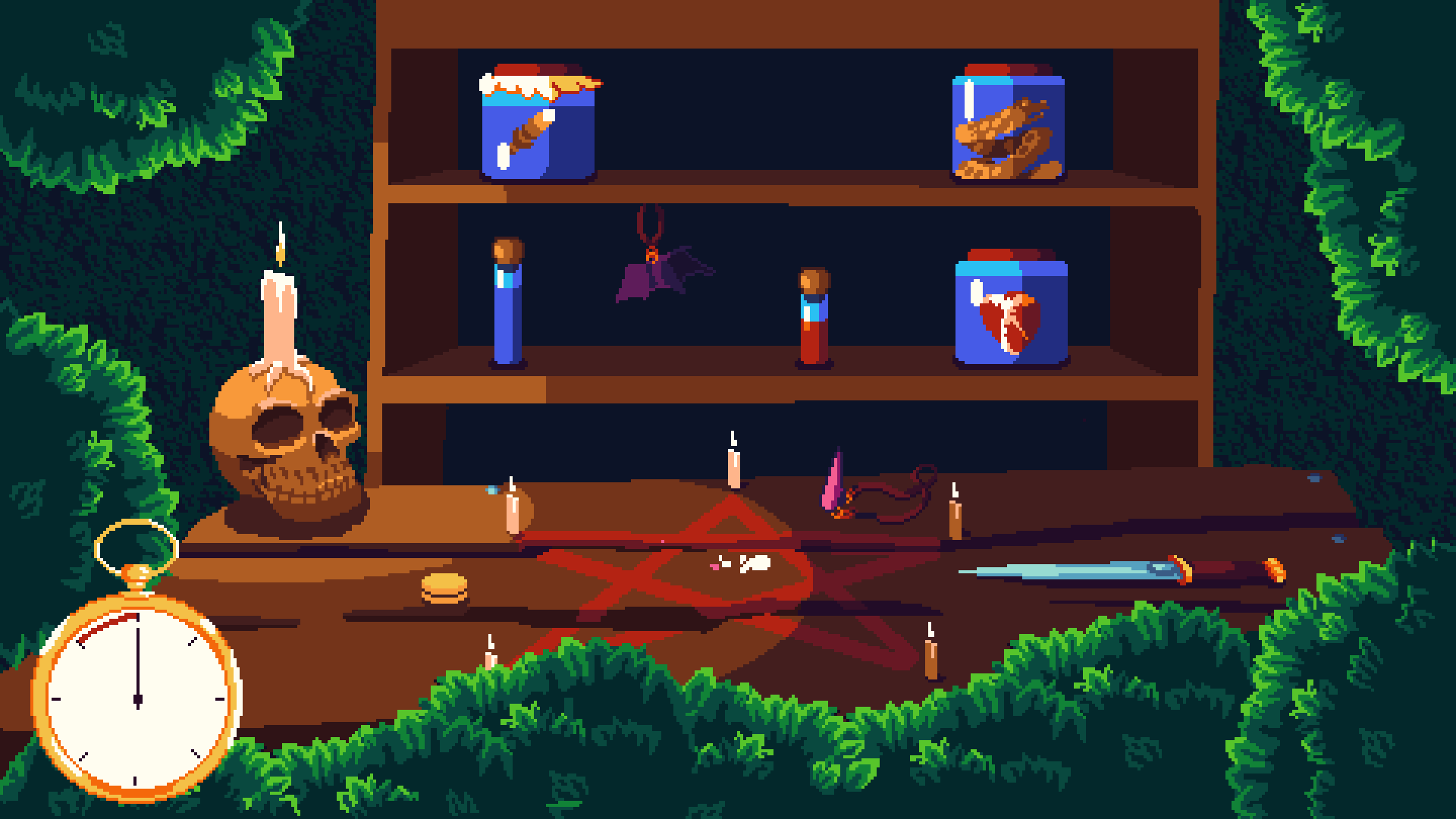 On the beginning of this year, I created Pixeldelic Studio.

Pixeldelic is a pixelart studio, which is something I have been doing on and off for the most part of the last 8 years.

The goals of the studio are straightforward:

But, for me to feel confident in creating it, a lot happened in this past years.

In this post, I will tell you a brief story of my journey through the pixelart world so far, and also about my contact with visual arts in general. And maybe I will go into my feelings about art too, who knows!

How it all started

Full disclosure, my mom is an an artist, so I guess I always had this incentive to do some art. Anyway, here we go.

When I was little, I wanted to be a fighter pilot (yeap, you read that right). The thing is, when I like things, I learn a lot about them, and to this day I still know a lot about planes.

I learned the basic aerodynamic principles, how their engines work (all kinds of engines), how they are piloted, how radars work (and how to build them!), but… I also learned how to draw them.

I used to draw planes all the time, in all angles. This is how I learned the basics of how light works and how to make good shading, and the basics of perspective (the damned wings are a pain to draw!).

Other very interesting thing I used to do was creating papercraft models (and sometimes other materials). This made me understand how rotations work in 3d and how to reason about them.

After that, I slowly started to draw less and less as I got hooked into digital hardware design, and later into software development. It was not until I started building games that I really got back to studying art, well, aside from filling the sides of school notebooks with small ink worlds and the occasional drawing while in the army.

Game Jams are little (or big) events where a few people get together to make a game under some constraints, usually time and resources limitations. They can be an online-only kind of thing or have a real location. Either way, they are amazing events from which people walk alway with a game ready.

One of those is the Ludum Dare, which is two simultaneous events, one running for 48 hours with more limitations and a more relaxed one that runs for 72 hours.

Ludum Dare was my first game jam, and also the first time I really tried making art for a game. Doing pixelart at that time was my choice because I was half decent at a pixel-ish style.

They sometimes have a little “warmup” before the jam itself, which consists in making a little game just to try out your tools and make sure your workflow is working allright. I did that, and I remember it was a game about mithology that actually I think was better than the game I did for the compo itself. 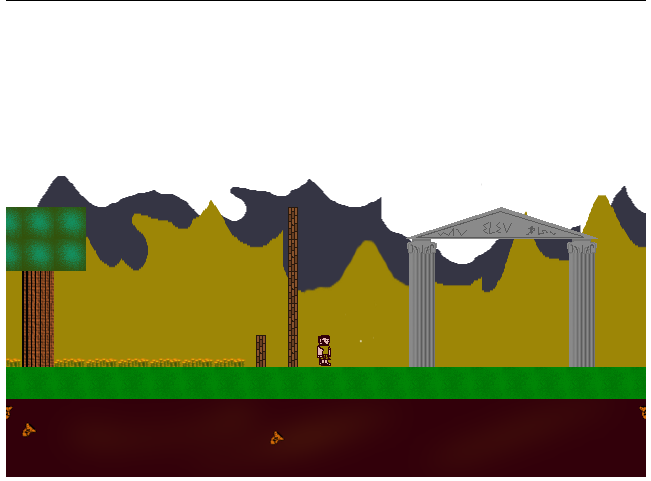 There you have it: an awful mix of styles that barely looks like a game, but an important milestone for me at the time, an important reminder for everyone starting now that no one starts even decent (that was already after a lot of pain) and something to keep me from going crazy nowdays when I think my art is shit: at least it is less shitty.

I remember that on the day before it started, I was so excited I couldn’t sleep. I revolved in my bed thinking of the amazing things I was going to do in the next few days. Little did I know… those days would turn into years (and I hope into decades, I still feel that way every jam).

The game I did for that jam was Dinossaur Evolution and it still amazes me how fast I got it up and running, which makes me remember that if you know your math (circles and the physics of collisions, mostly), an engine will only slow you down. A lot.

This was after the first 16 hours: 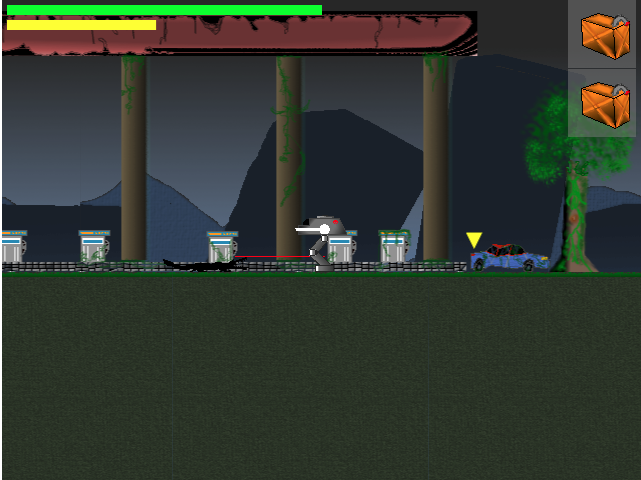 At this time I used to use GIMP for everything, so that’s what I used. It was not until much later that I started to used pixelart-specific tools (namely Aseprite).

A result of using GIMP is that I was tempted to put effects and filters in just about everything: 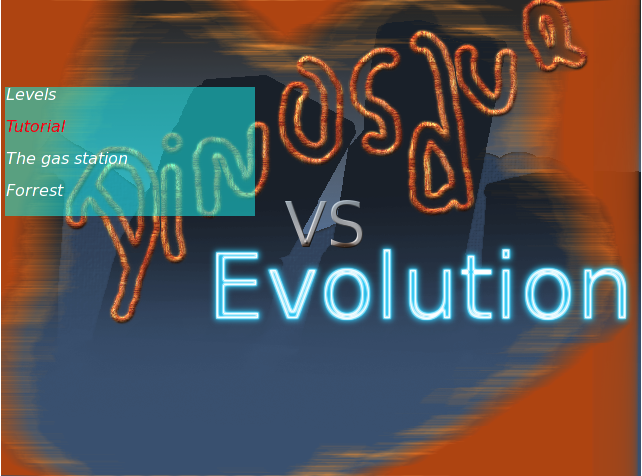 But even as though this game lacks a consistent art style, there are a few things I think are nice. Those buildings in the background for example are pretty good.

A couple years later I got pretty interested in digital art and actually studied a bit of pixel art, real pixel art this time. I started to notice how precise placement was important and how to choose colors, among a bunch of other things (including a lot of advances in how to animate).

I did another Ludum Dare (starting my long running tradition of going into jams 24 hours late).

This was the result (you can also notice I was already using Aseprite, in 2014): 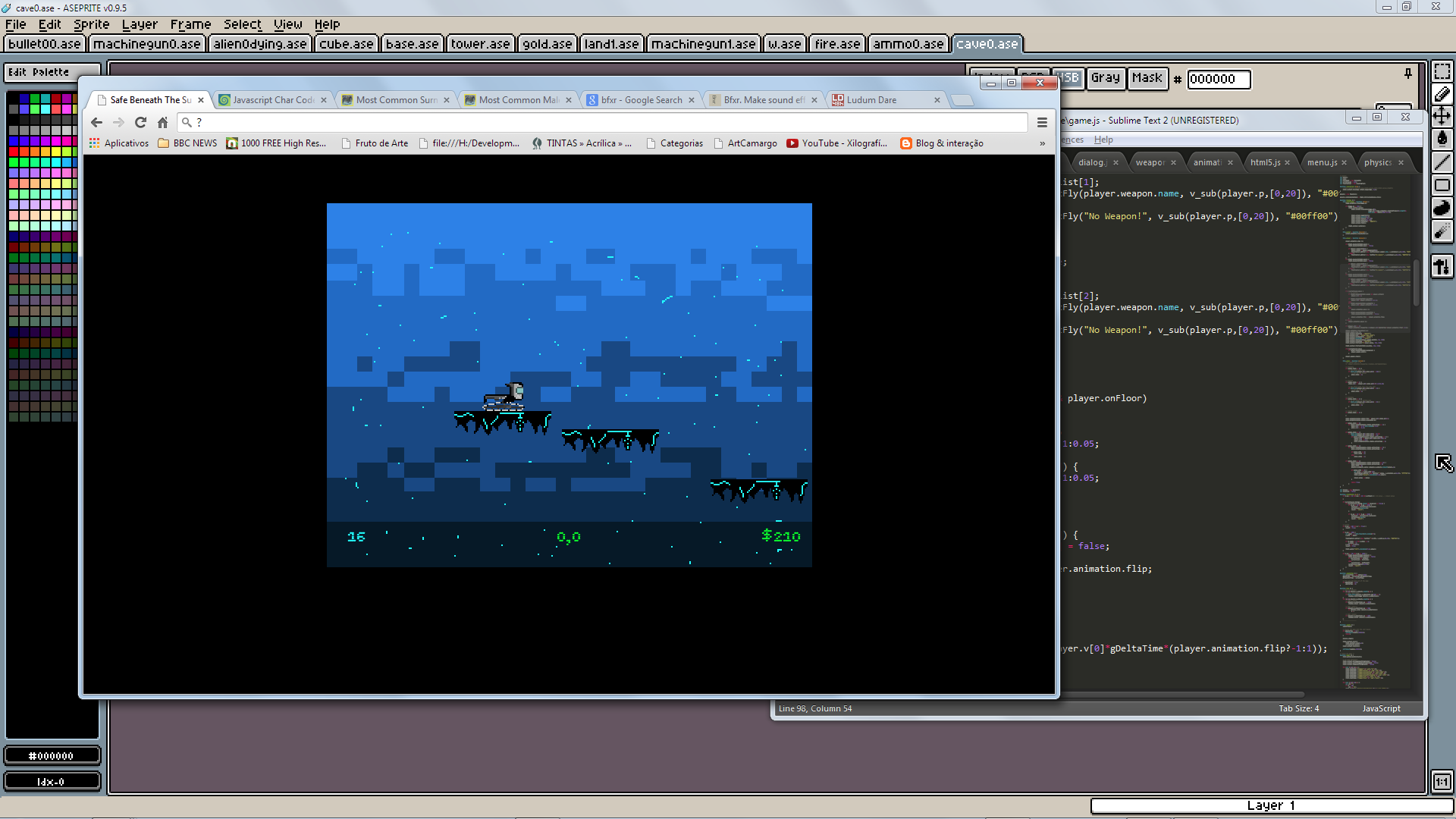 After those experiences with making pixel (and pixel-ish) art for game jams I kept doing pixelart and studying digital art (while also getting a technician degree and working on advanced mesh networking protocols, but that’s another story), but I didn’t do games with pixelart for quite a long time.

I only remember one game I tried to make in this period that used pixelart heavily, it was a tribute game for a couple of artist that inspired me, Studio Miniboss (pro tip: nowdays Pedro is doing an awesome series on pixelart and animation, check it out). Here is a bit of the art found in that game: 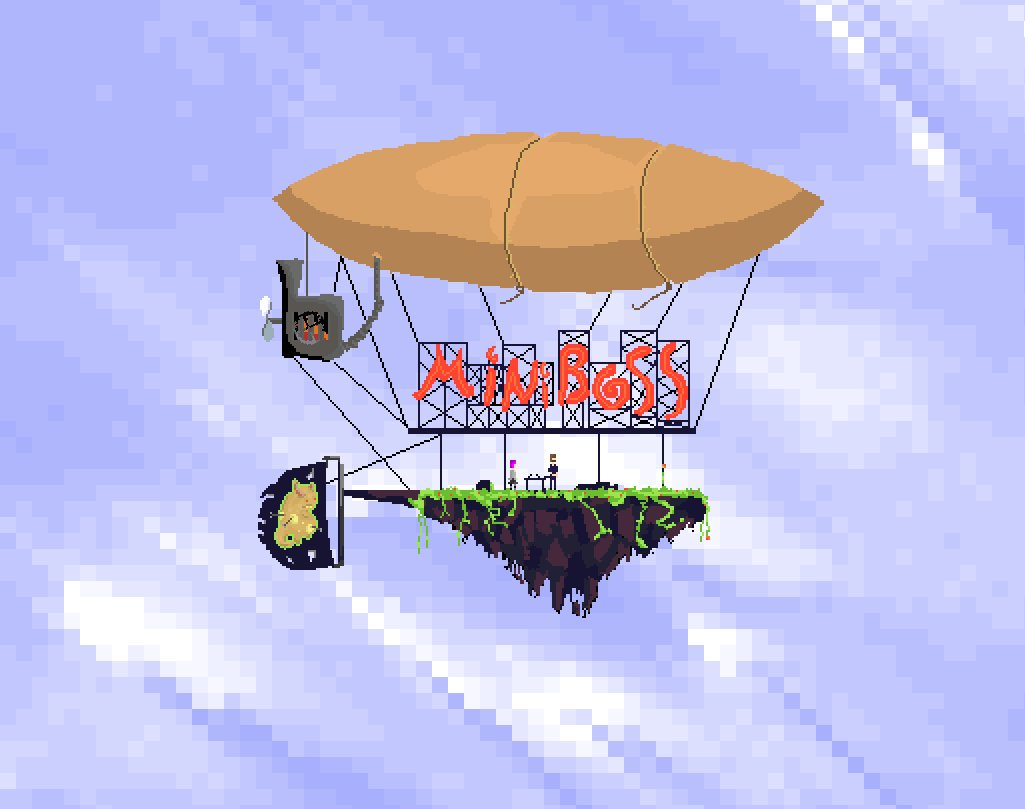 Also be sure to check out their game Celeste. And since I am talking about it, check out the amazing music from Lena.

It was not until 2017 that I really picked pixel art again; and somehow my studies paid off instantly.

This one was the first piece I did after my pixel for games hiatus: 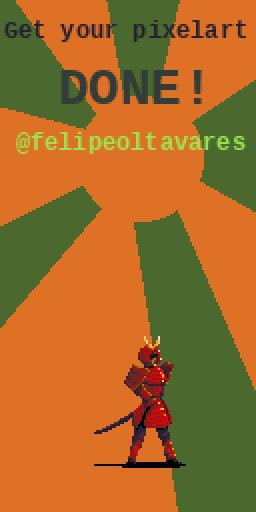 You can instantly see the improvements in form and specially in color.

Shortly after I started doing pixelart for clients, mainly through the r/GameDevClassifieds and r/forhire subreddits. While it wasn’t a success in monetary terms, I consider it an important learning step in the sense of working with art direction.

It is pretty hard to let go of what you desire for the piece and embrace the idea of the client. Notice how I say embrance, because it’s not just about blindly following orders, it is about having a sense of the feelings the client wants to express and trying to convey those not only in the ways the client imagined, but also in new ways.

During those experiments I had did some animations, but it wasn’t until I felt more confident in my rendering skills that I started focusing more on the details of animations.

I also had an important breakthrough in a jam game I did before that, that nowdays exists only as short gifs and screenshots: 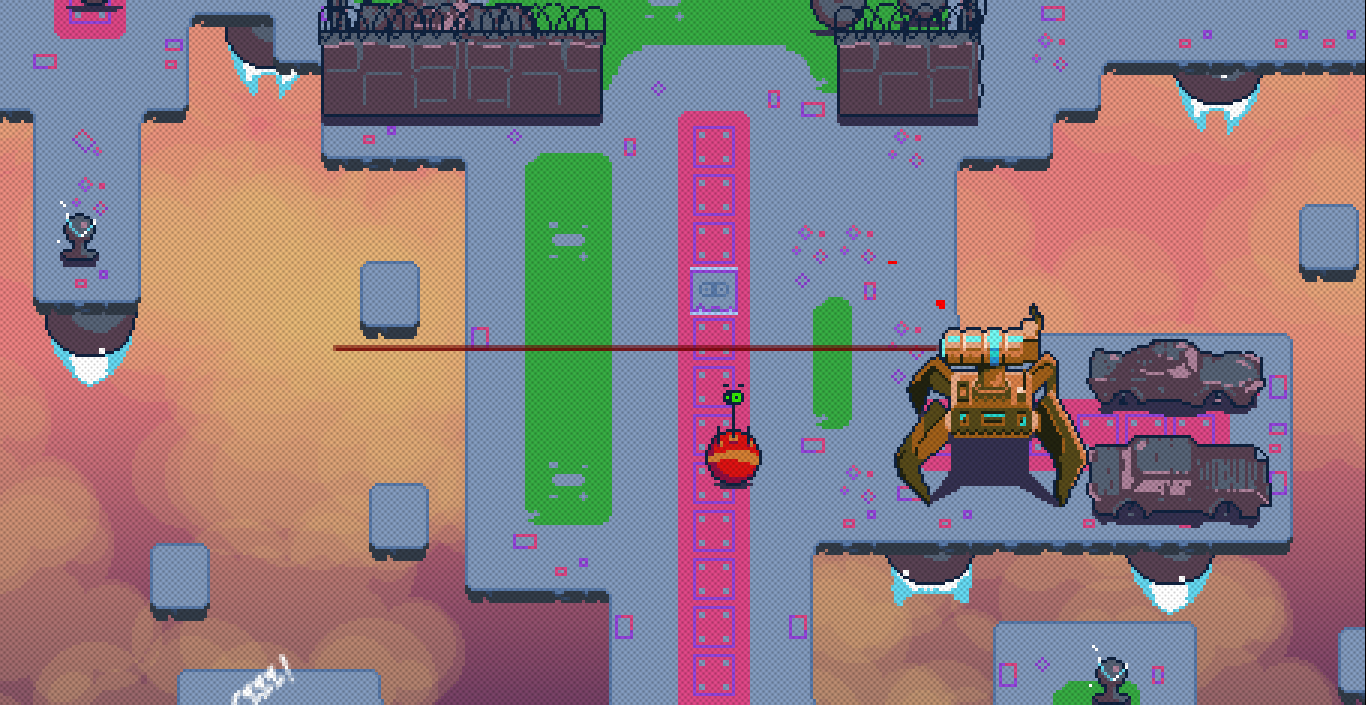 This game was important for me in two senses: firstly it taught me how important consistency is when making a bigger game, secondly it was a milestone that made me confident I could create great art for my own games and that my art and animations could have personality.

I still do not think my art is great, so I am always looking to improve. Mainly on:

If you are making a game that needs pixel art, be sure to check out Pixeldelic Studio!